This blog is written by Rob Johnston.

Difficulty: 7/10 -> Taking distance/elevation/terrain into account. This one was mainly distance.

Interested in doing this? Here’s the alltrails recording I recorded:

Check out some photos here of what to expect: 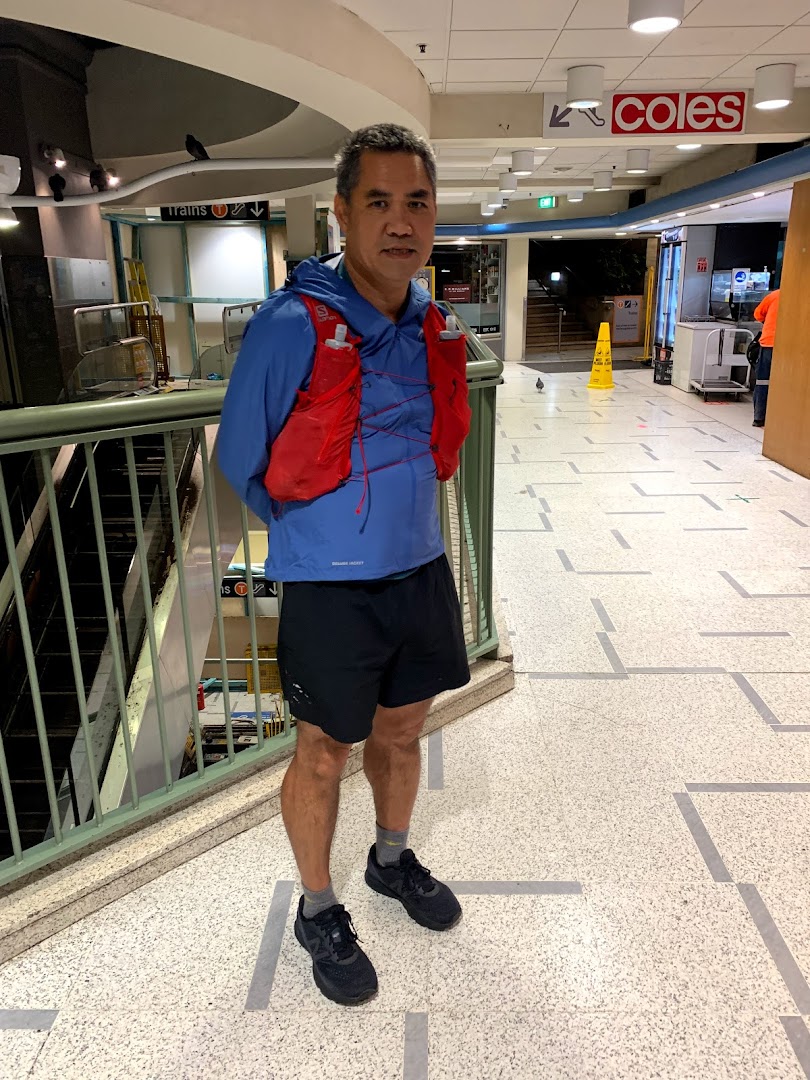 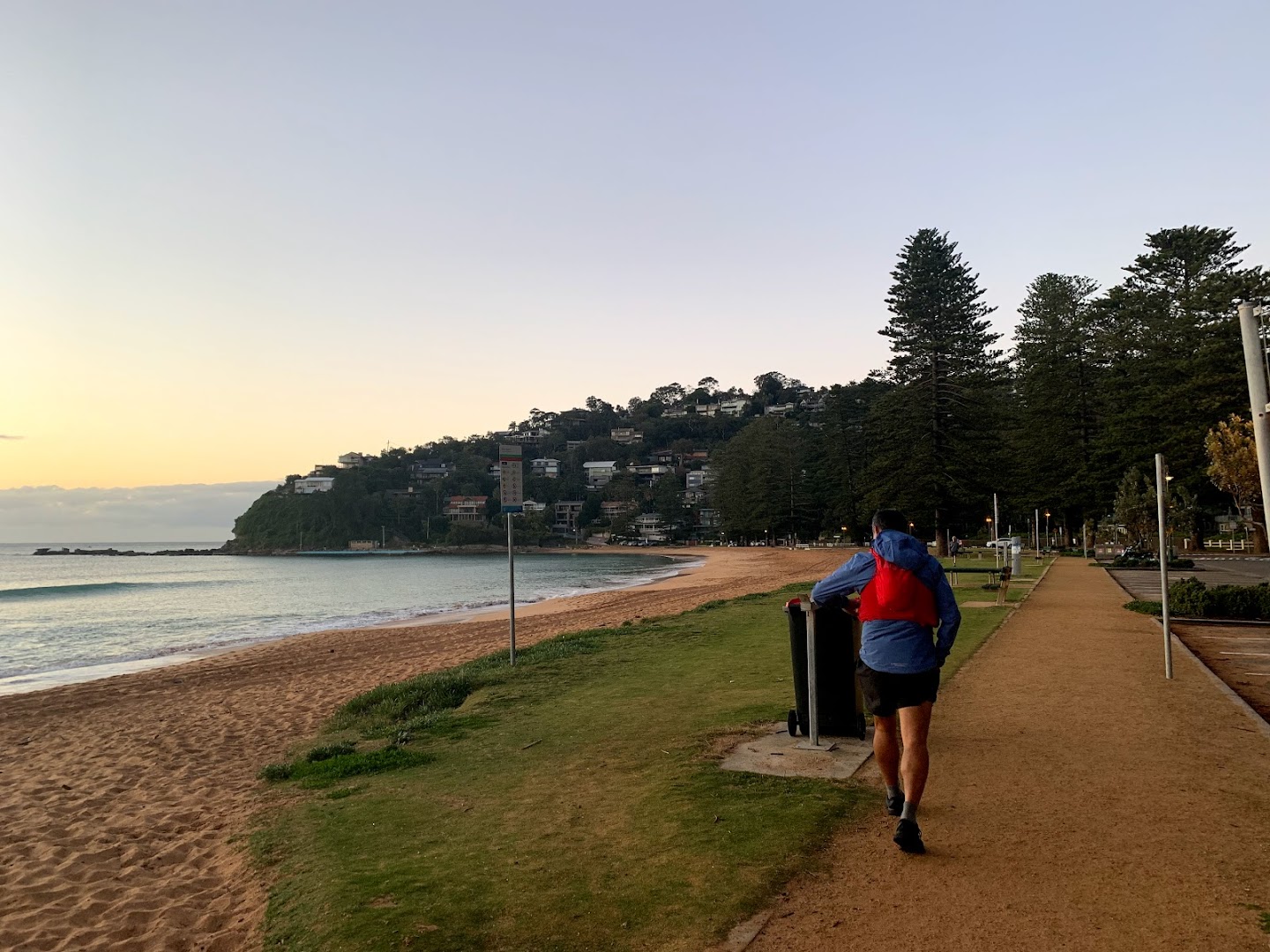 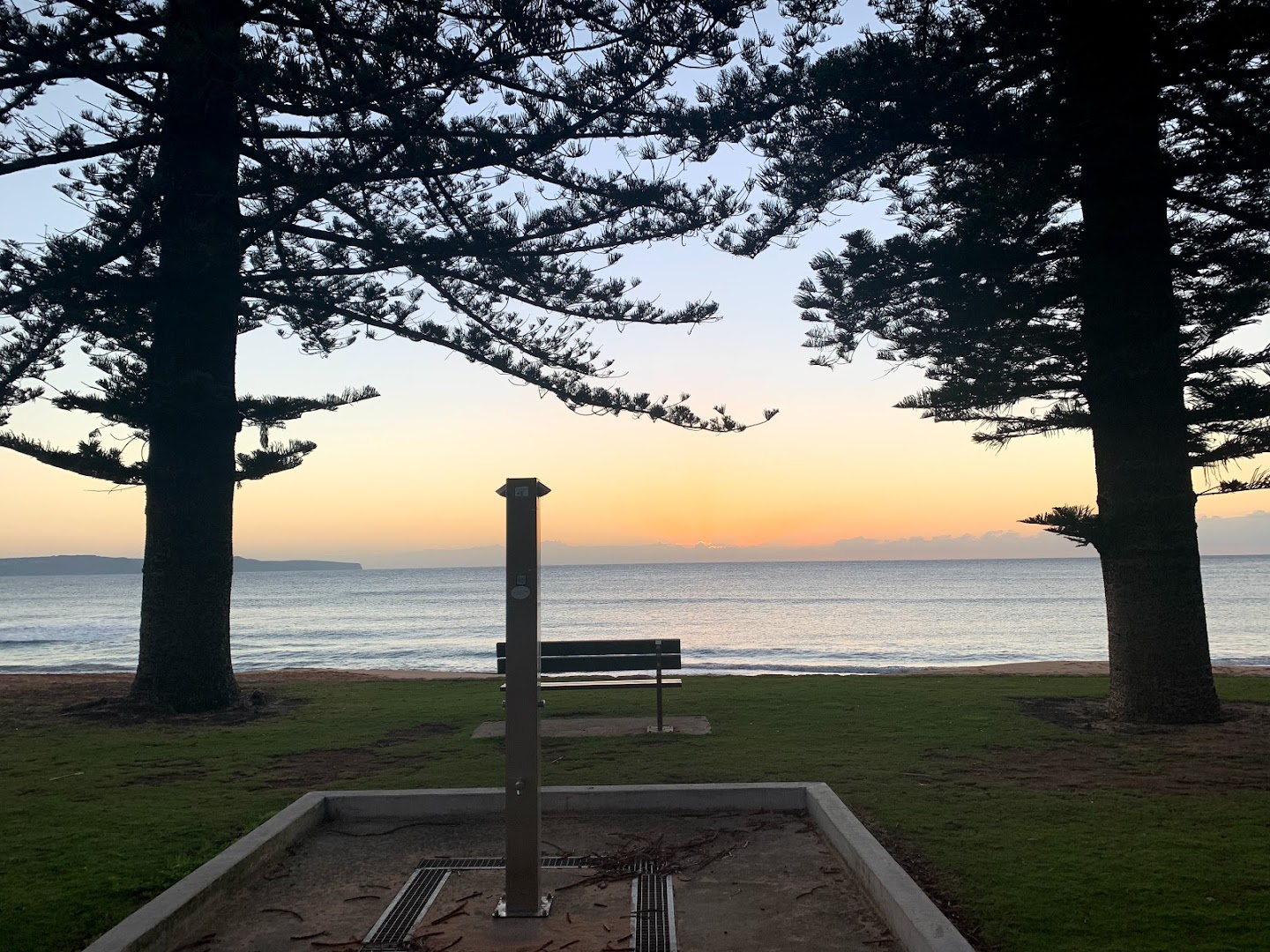 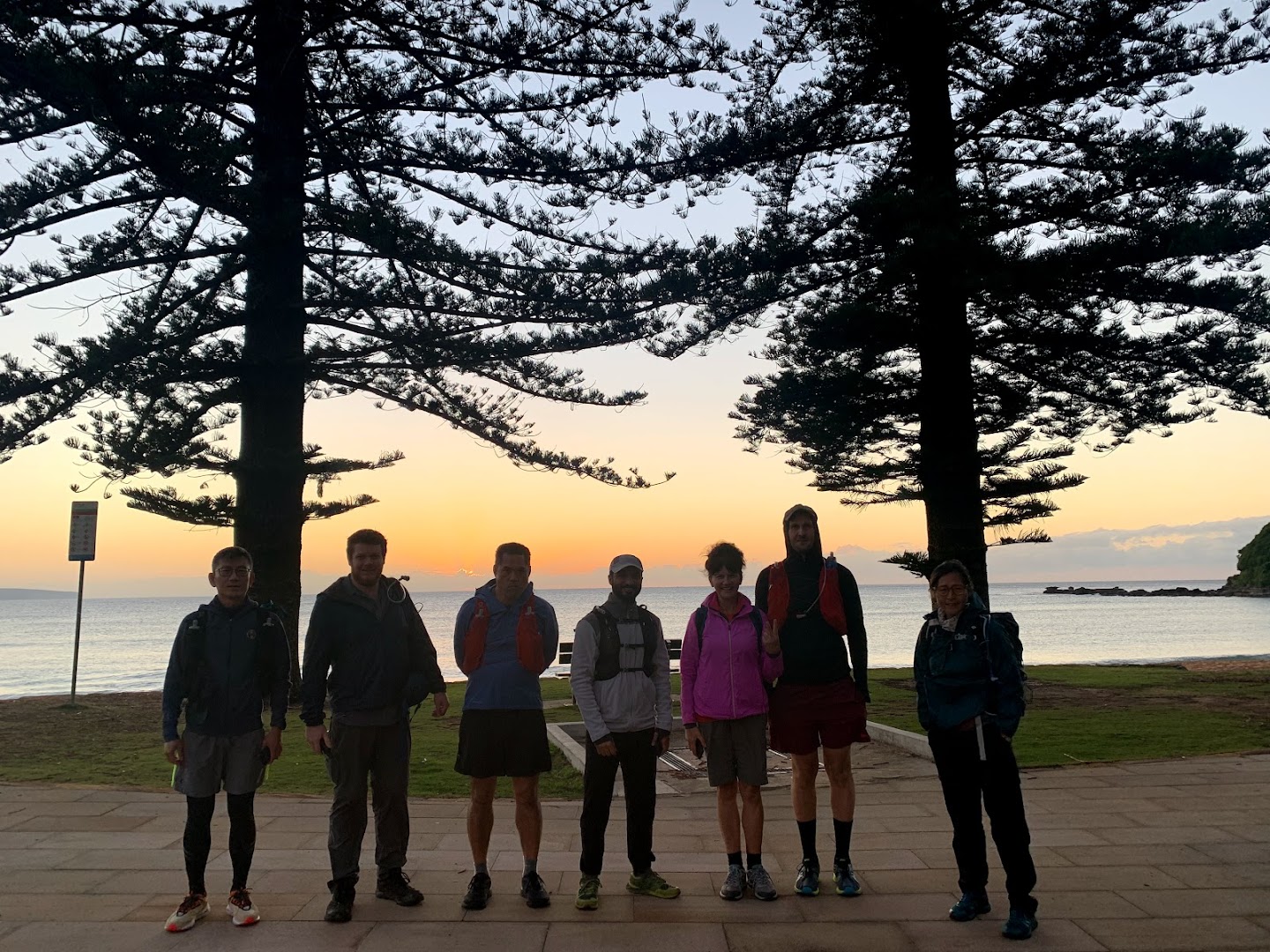 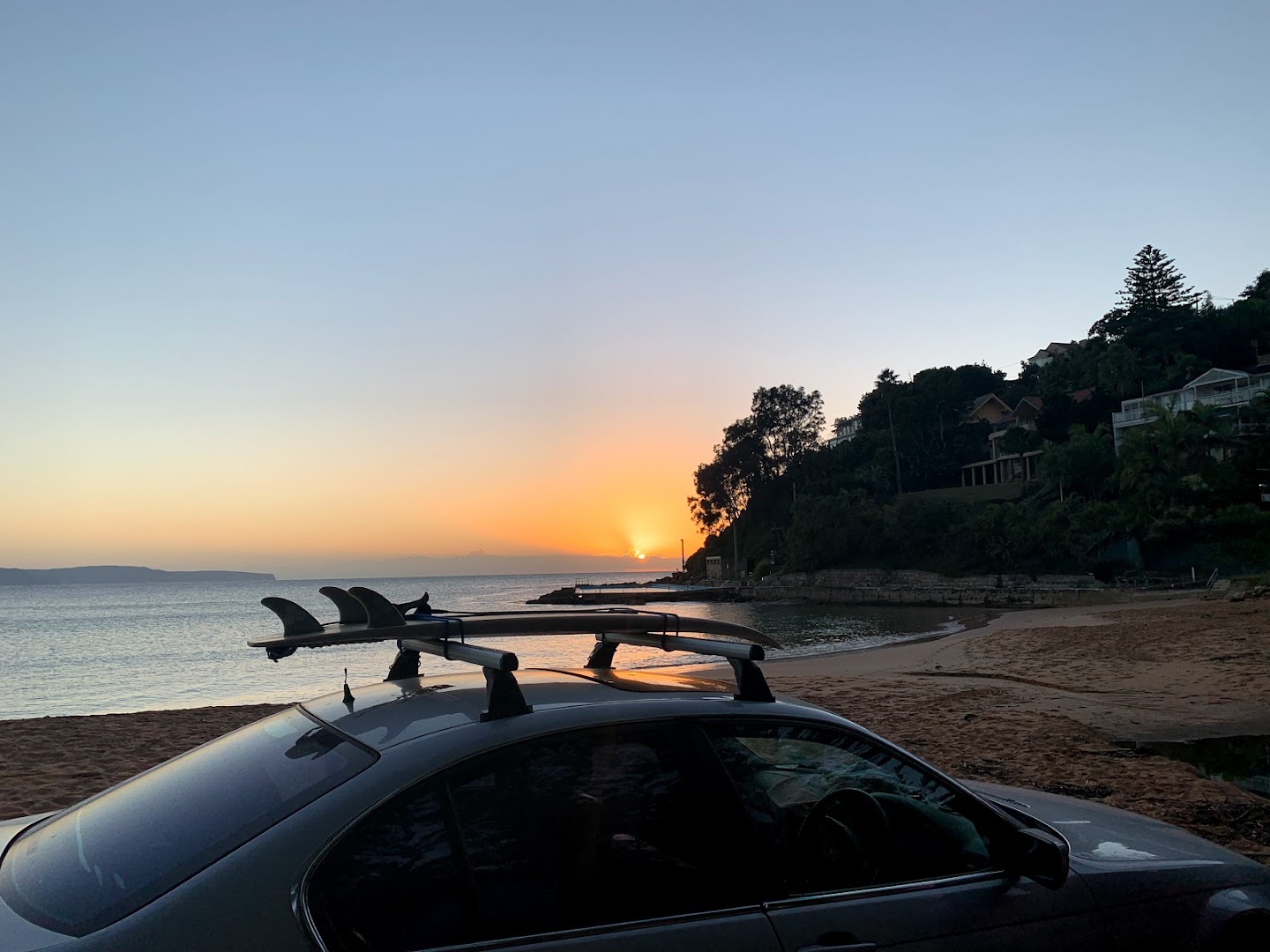 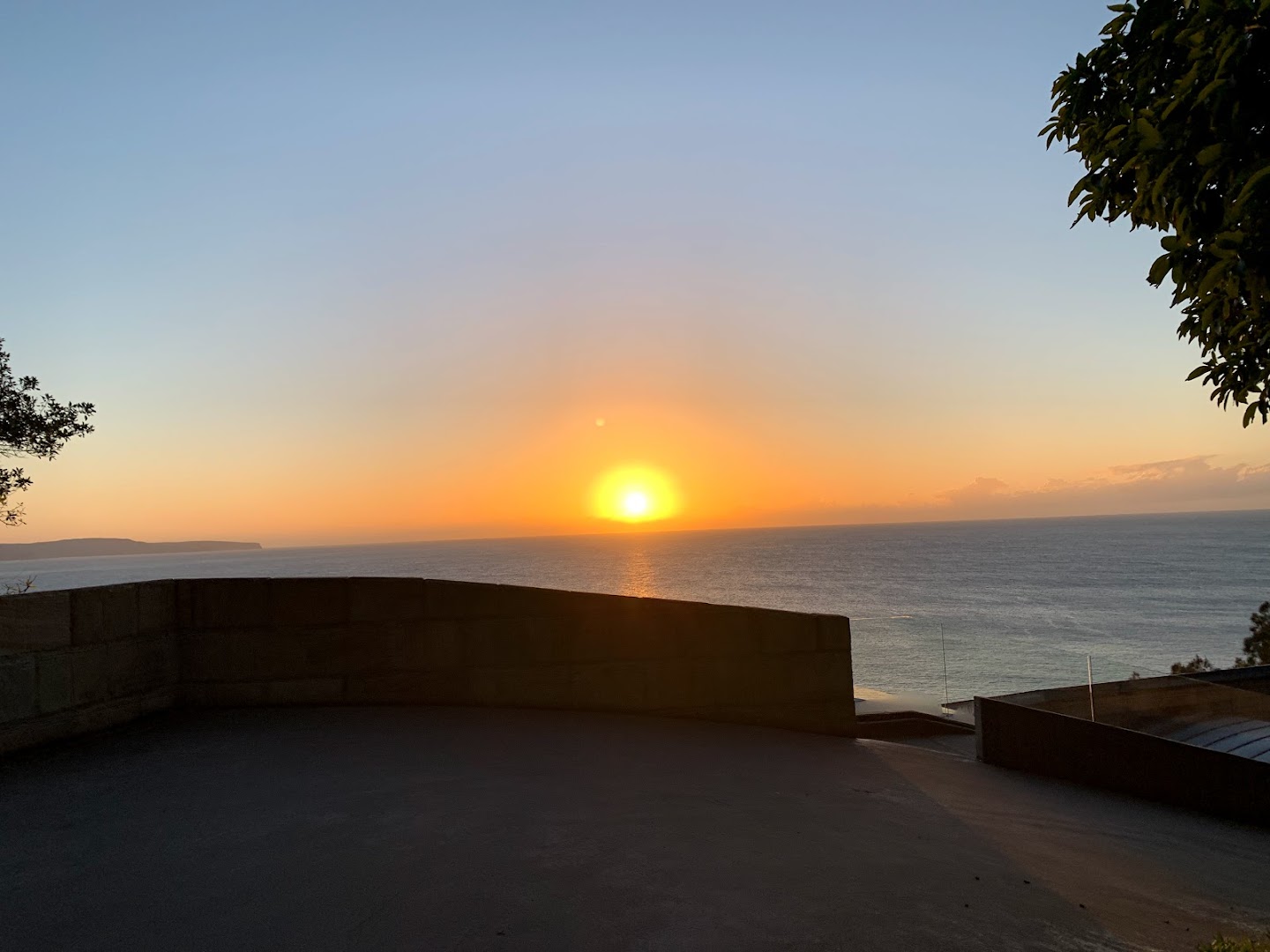 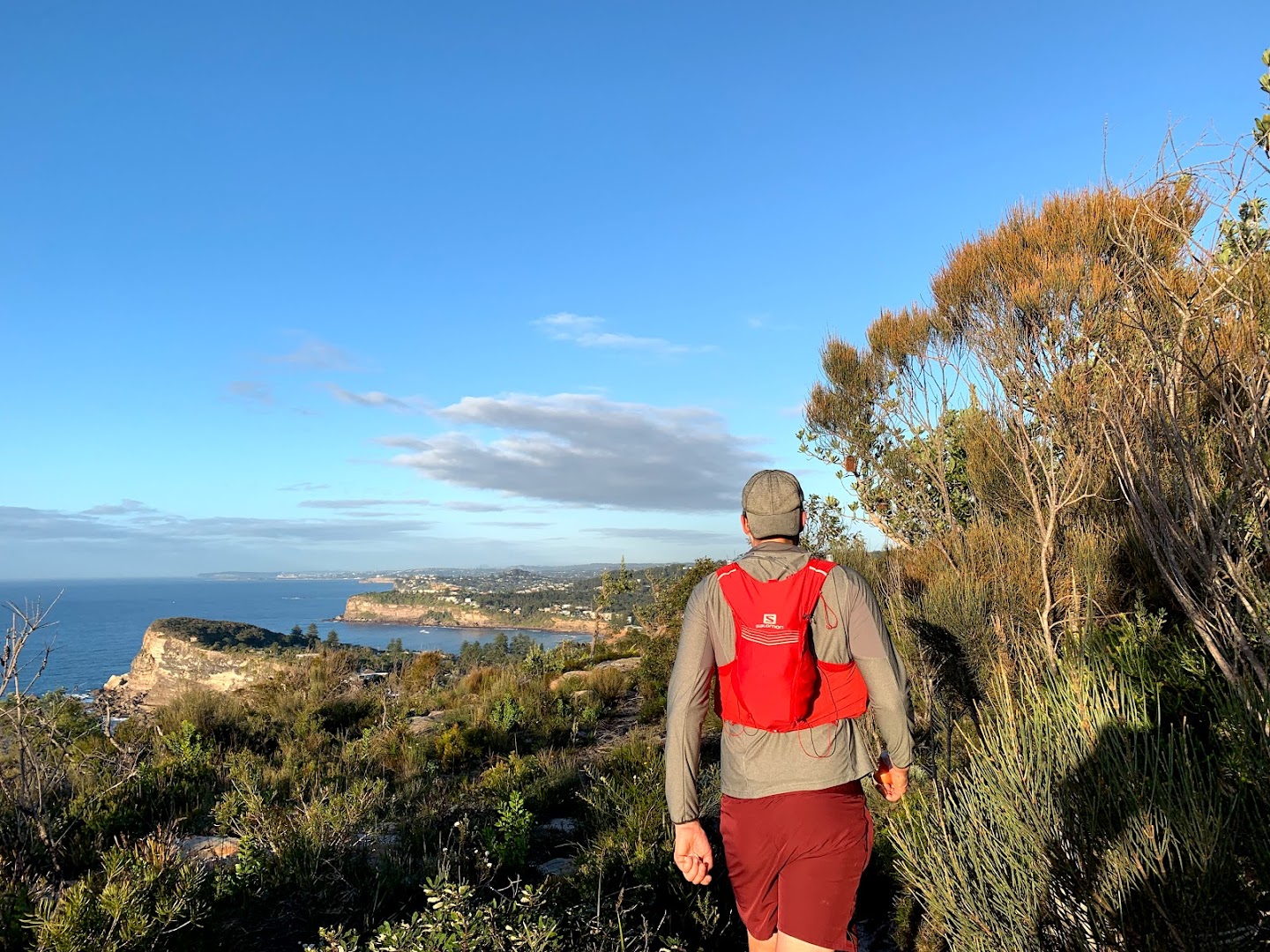 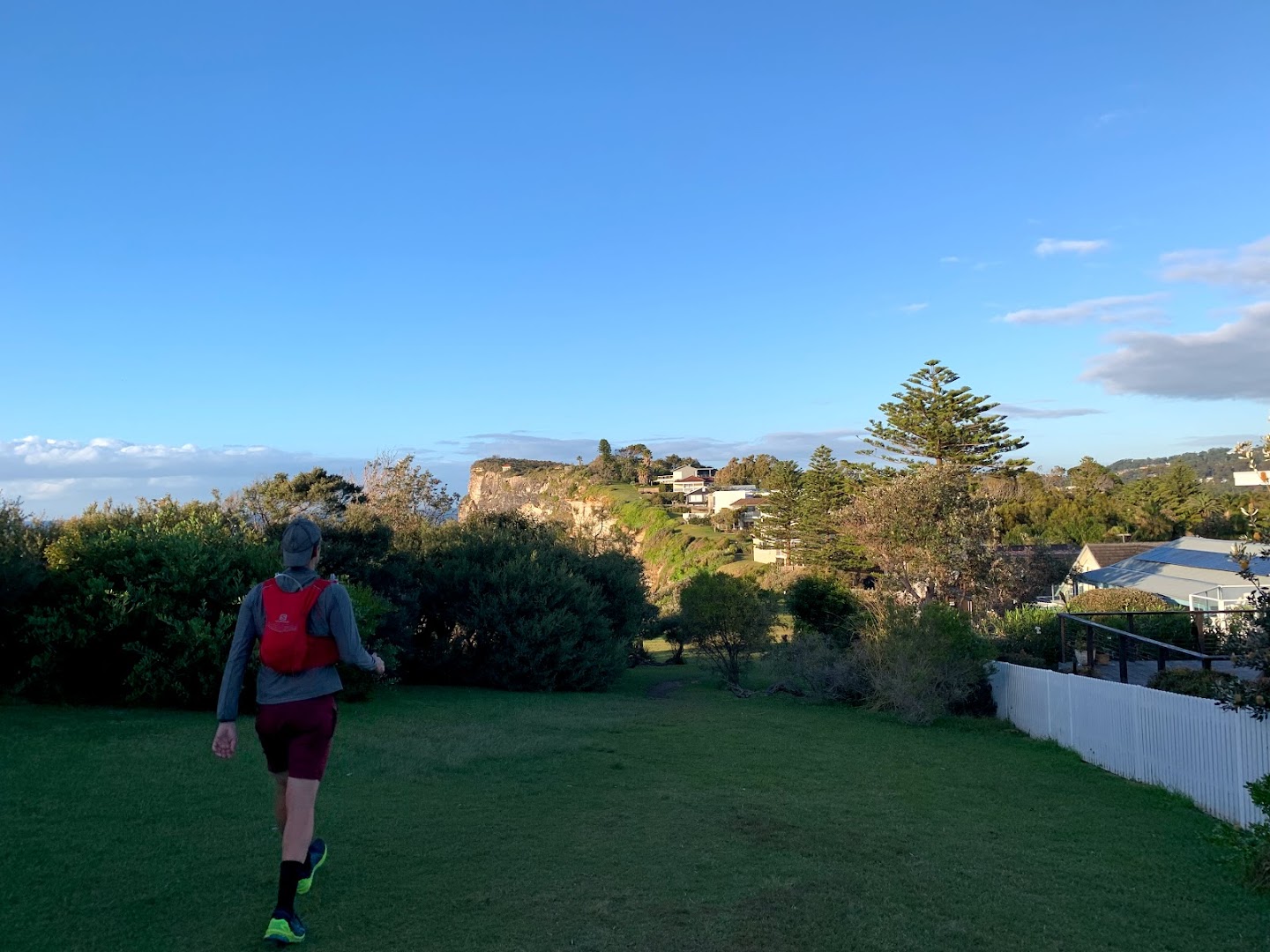 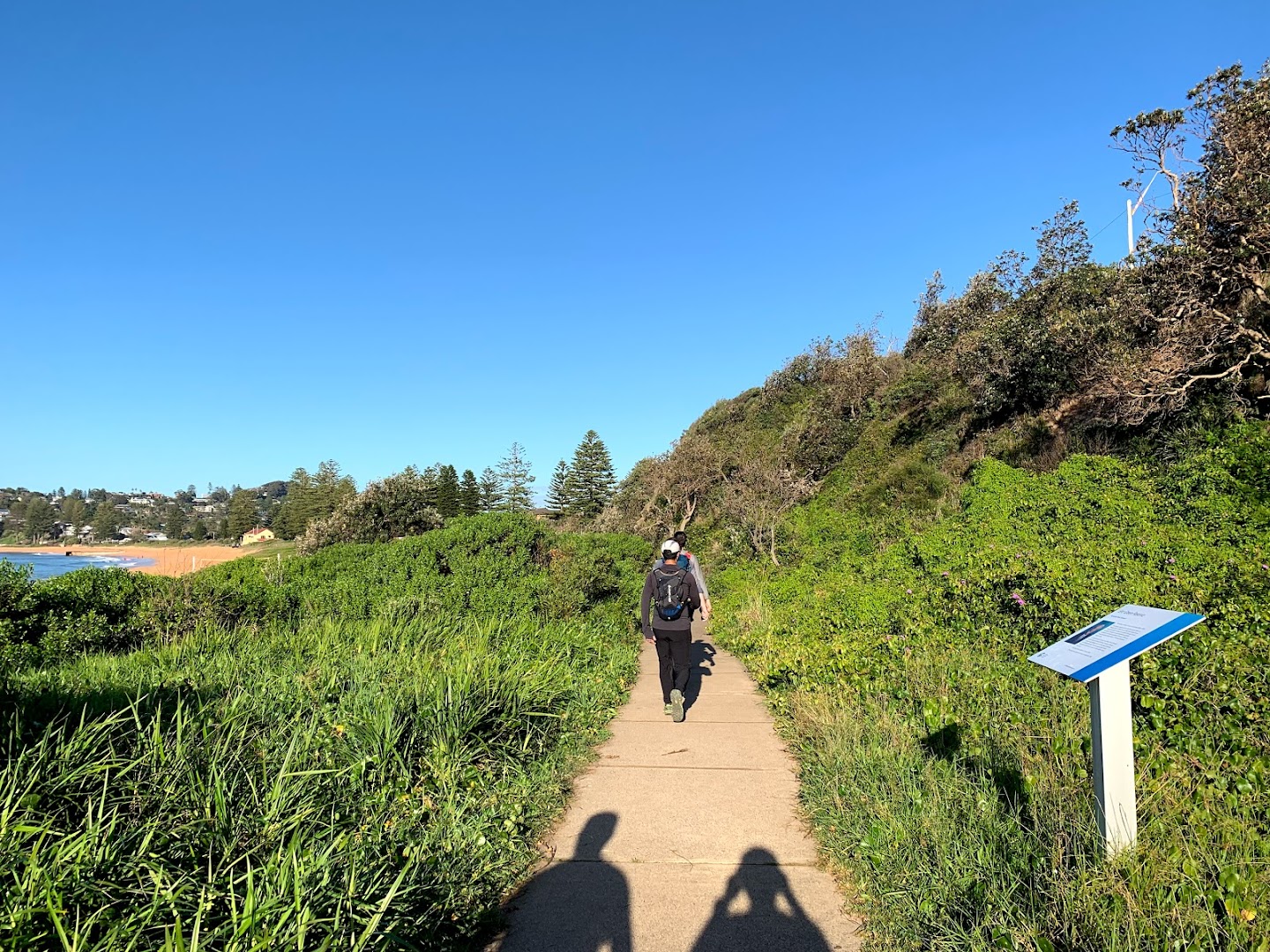 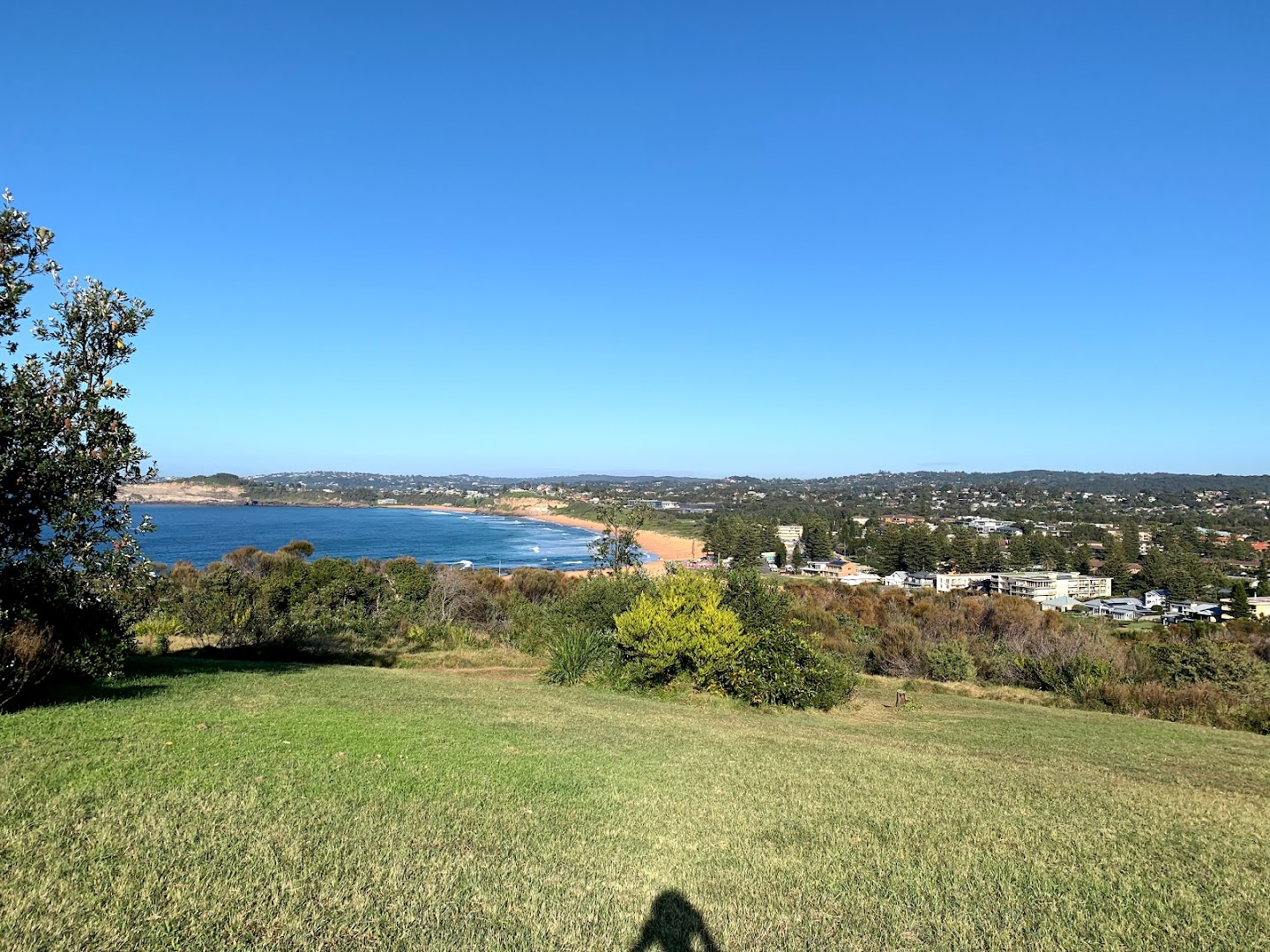 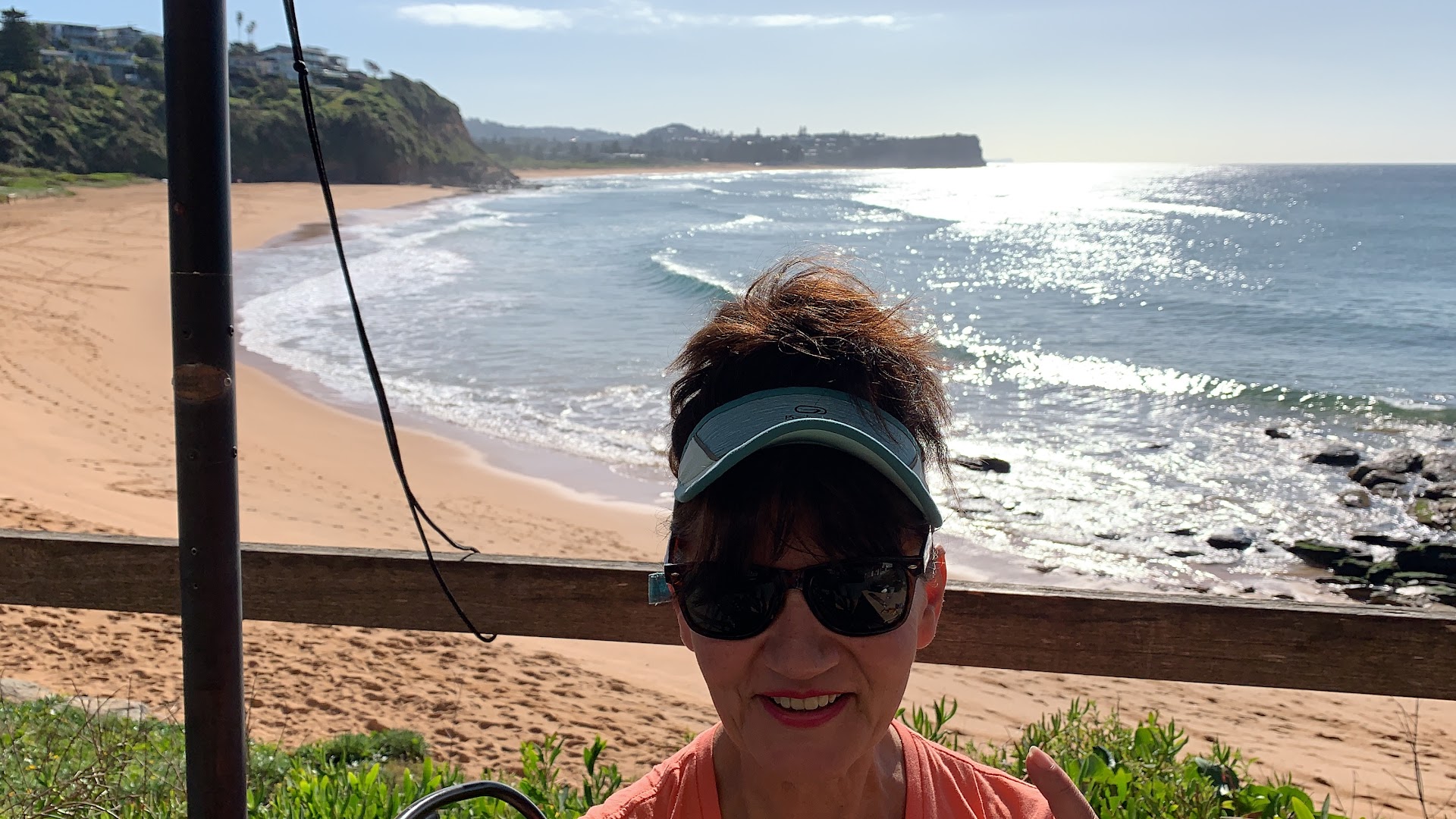 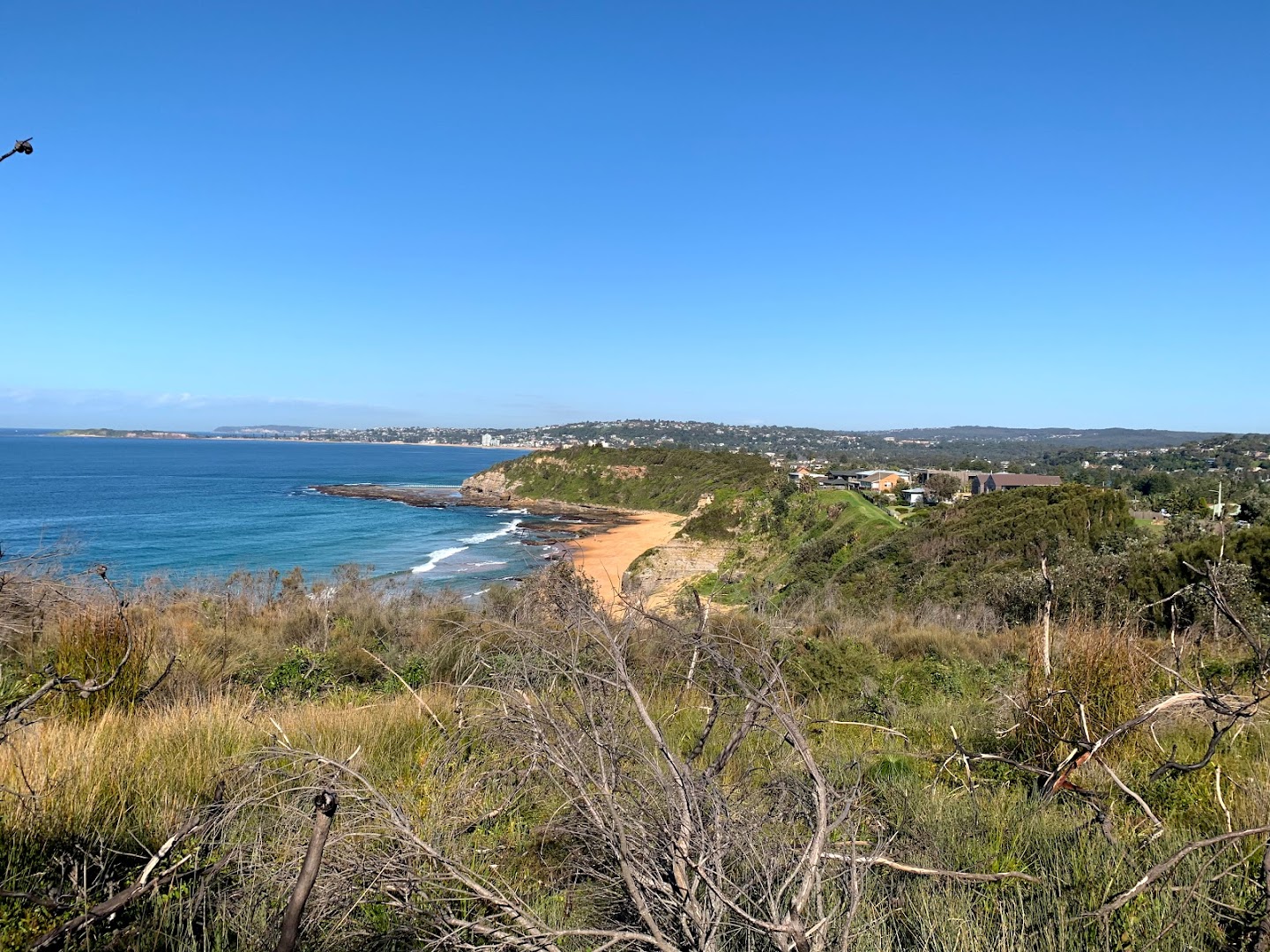 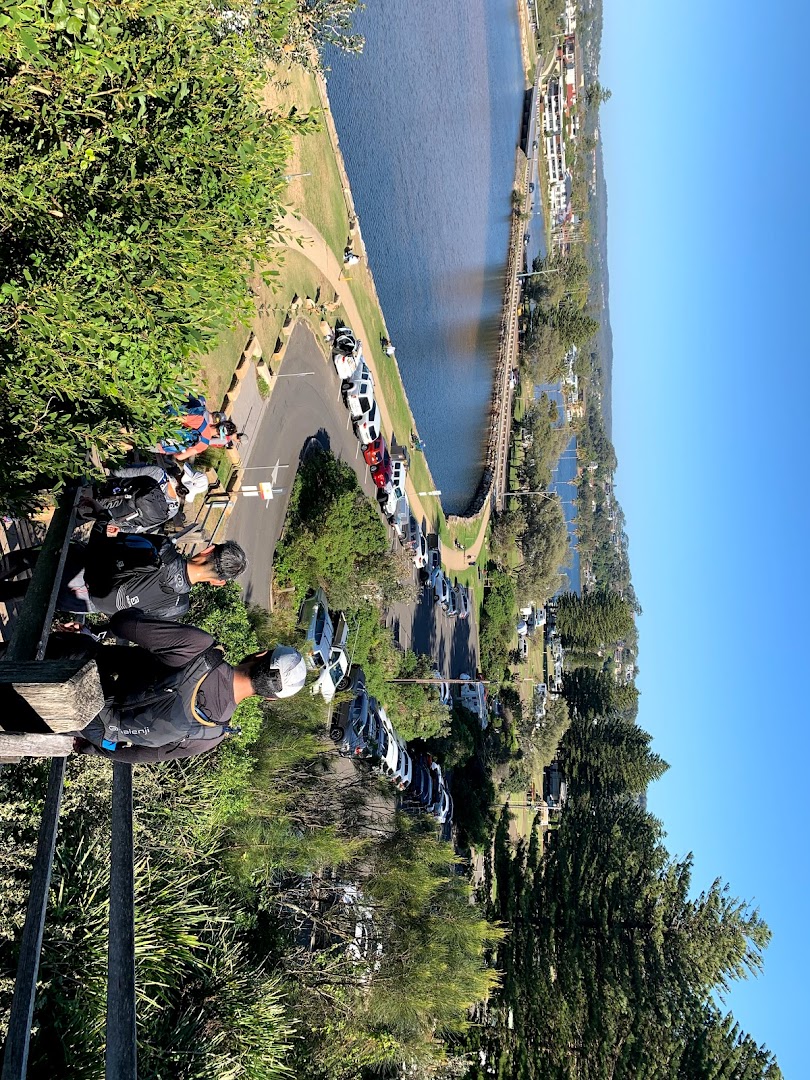 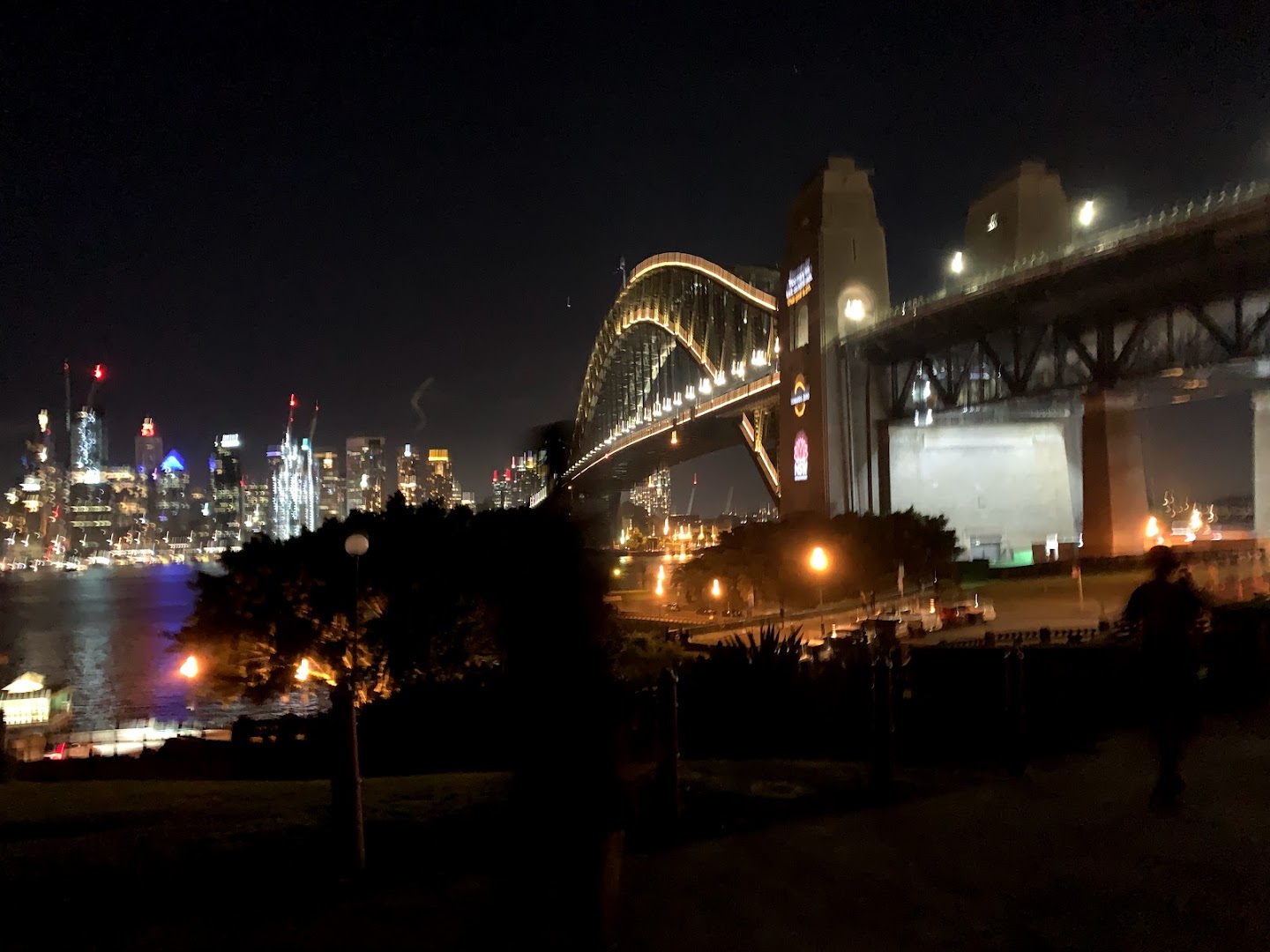 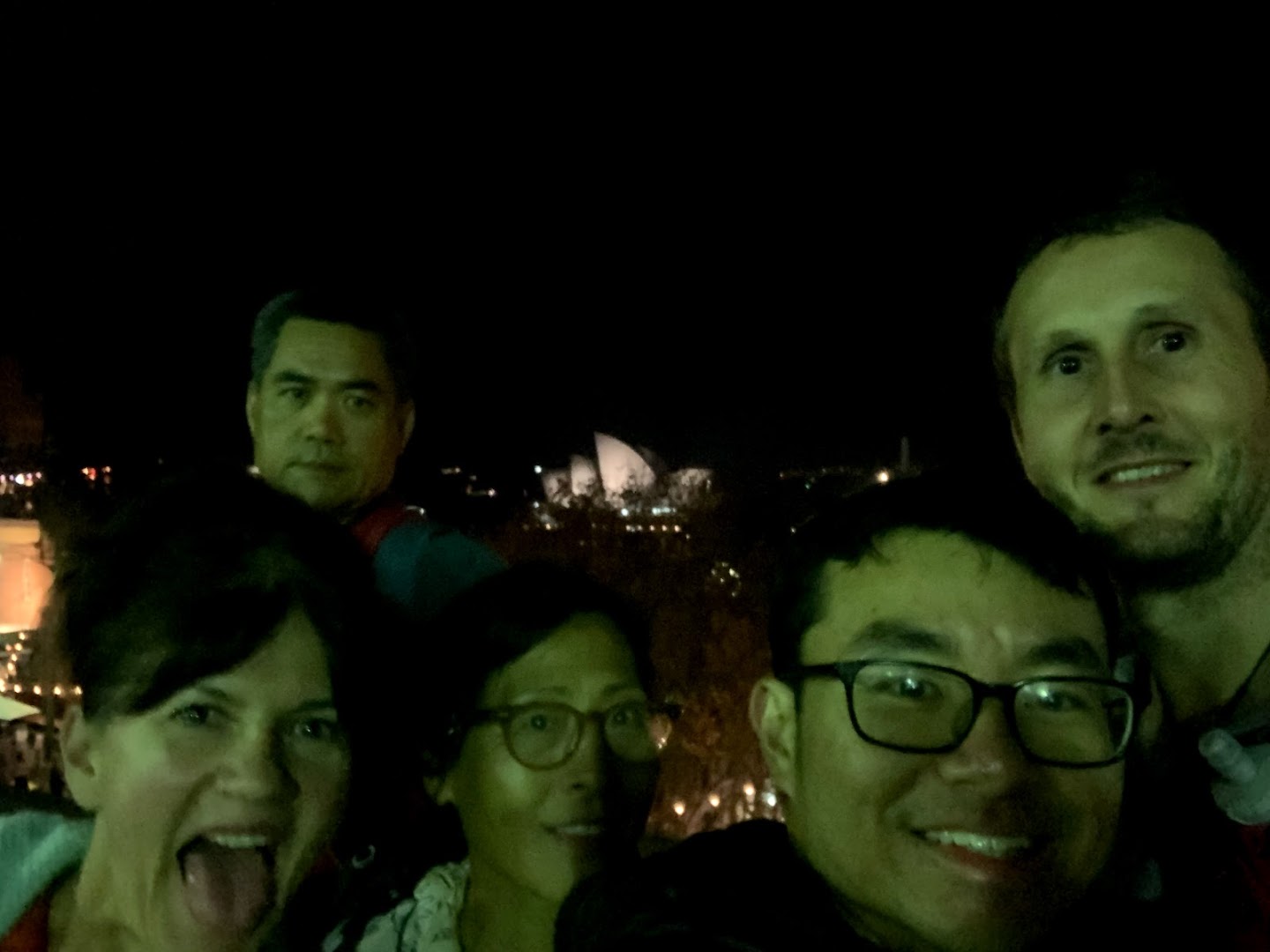 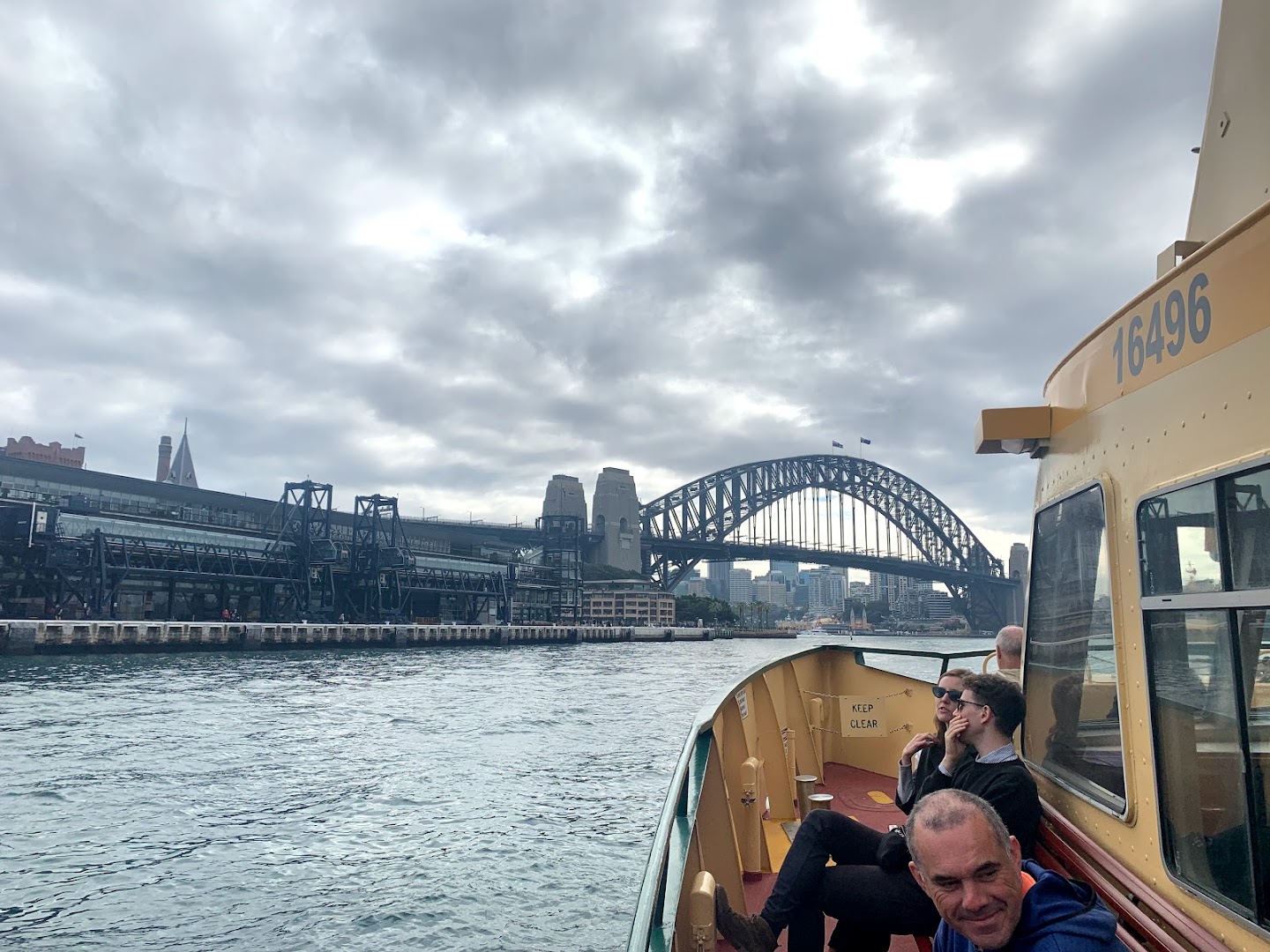 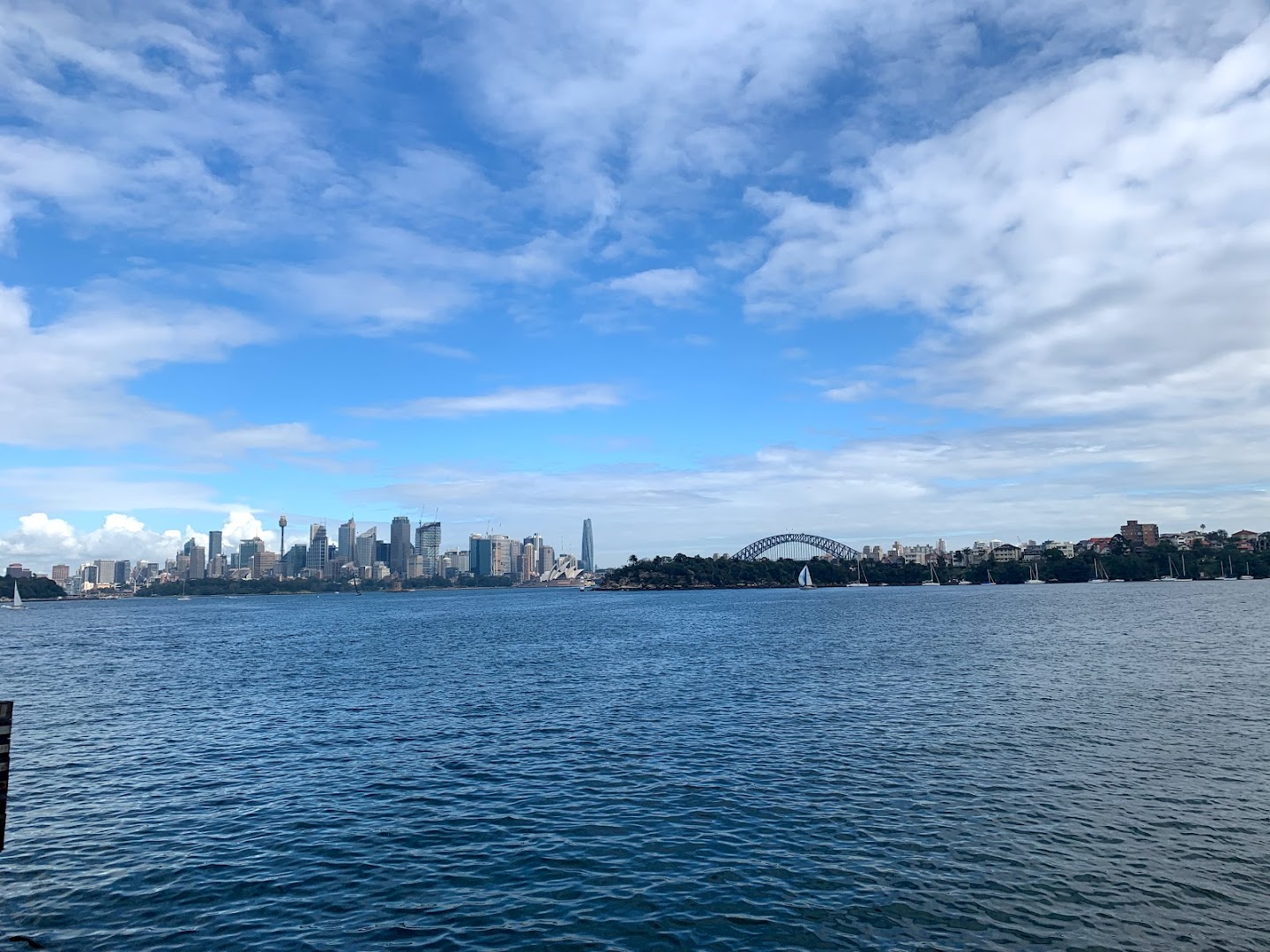 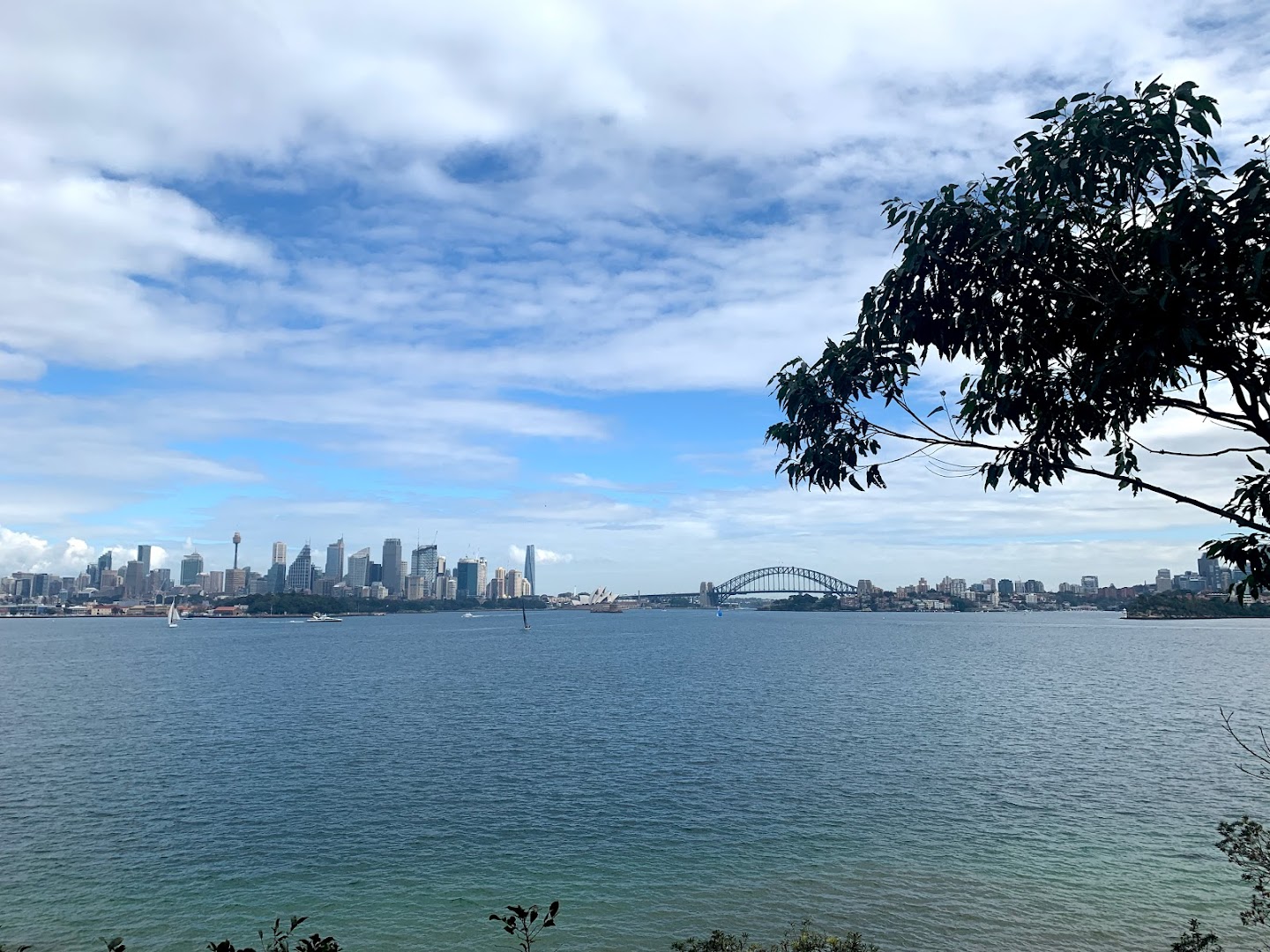 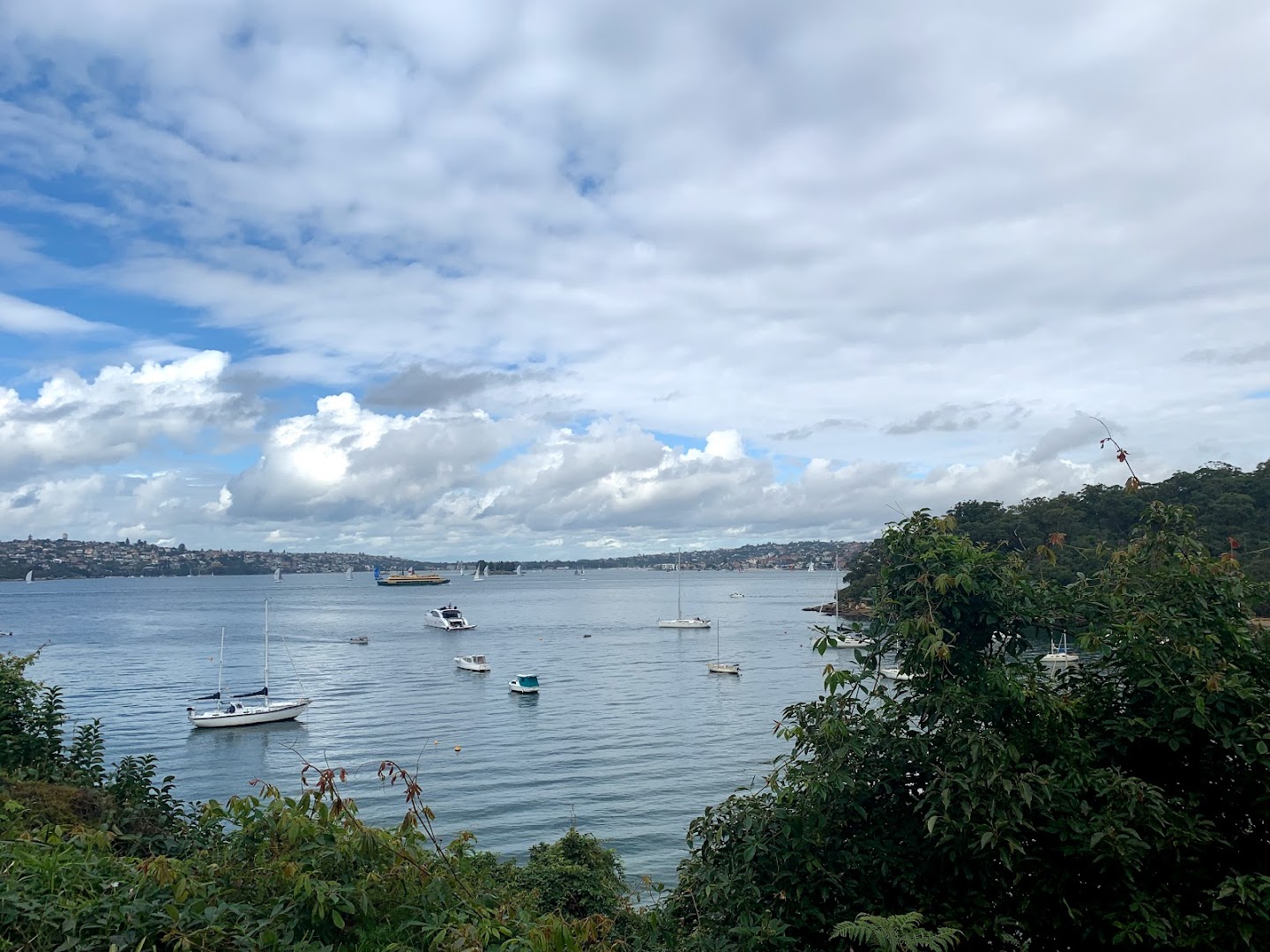 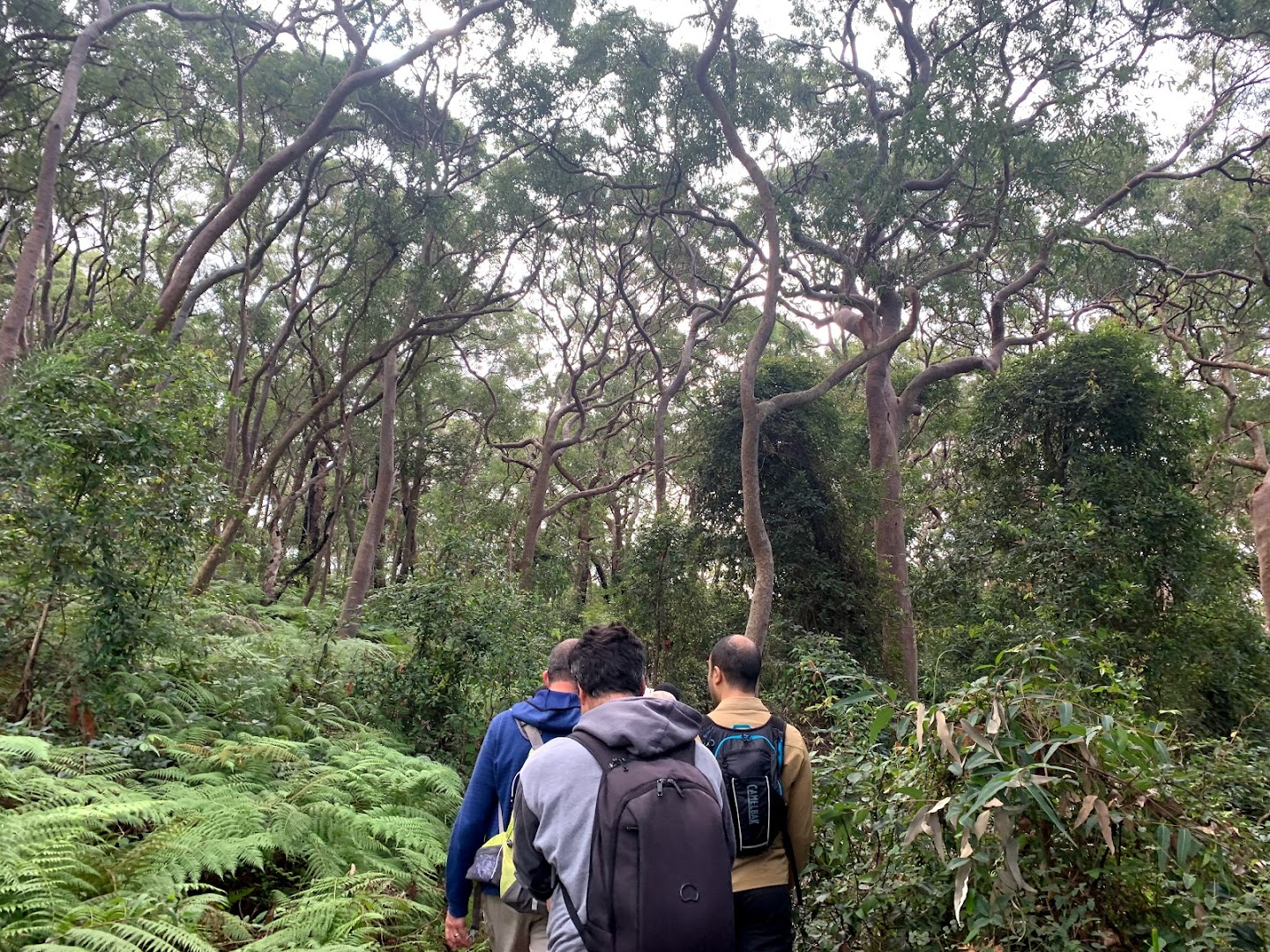 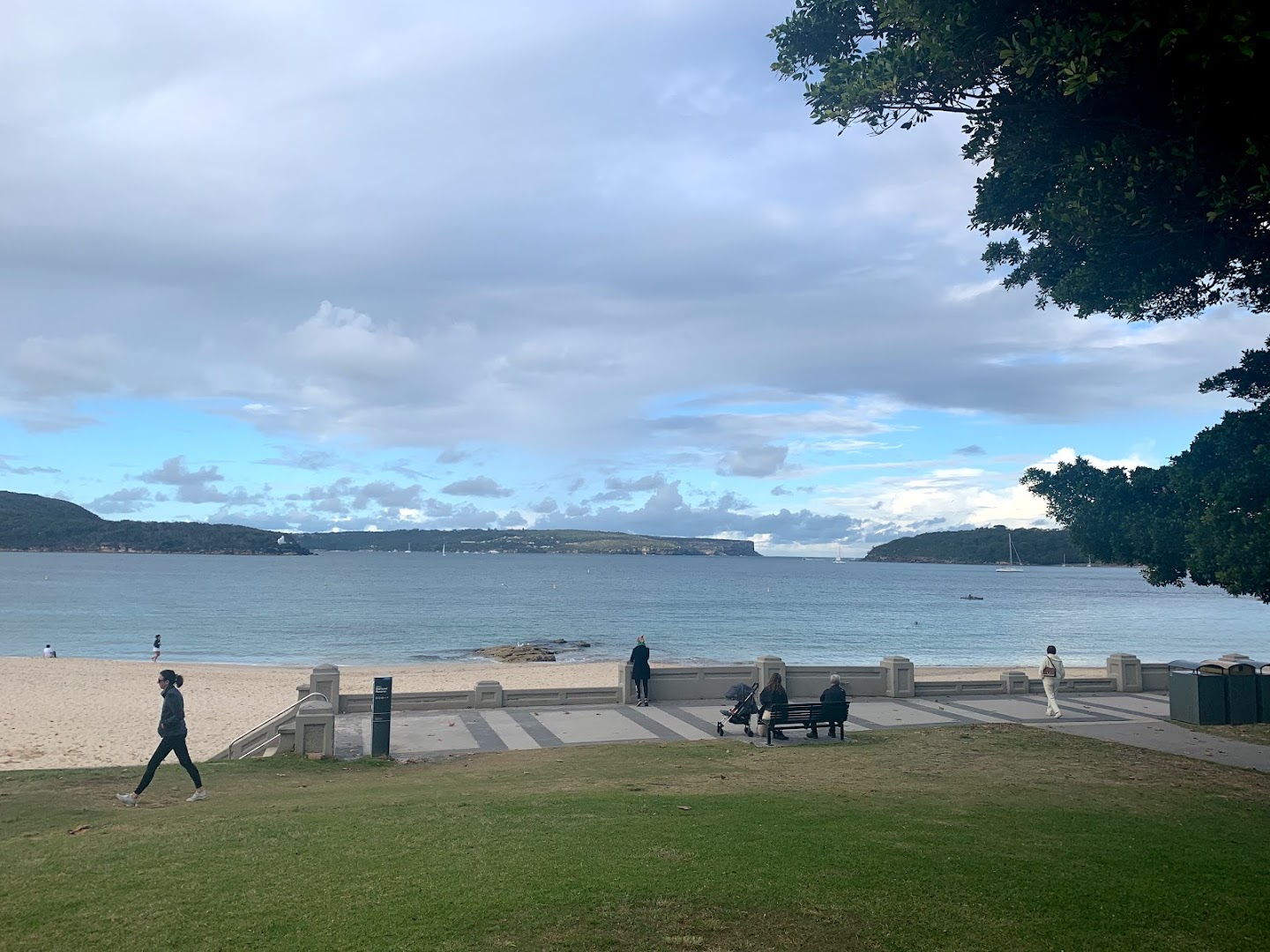 Check out the Relive video here:

The morning started early and there was an excited vibe in the air as the 8 of us made our way to the start of the walk, at Palm Beach. It was a beautiful morning when we arrived, just in time to see sunrise, and at 6.45am we set off on the walk.

We set off at a good pace, with the plan being to walk at around 6km p/hr for the first few hours while it was cooler, and make some headway into our 70km day hike.  The sky was clear and it was great to be able to breathe in that fresh, coastal air.  It wasn’t long before we were up on the hills above Palm Beach and then Whale Beach, admiring the sweeping ocean views.

Once arriving at Avalon Beach, about 6km in, a few of us needed to top up our water and use the facilities, so we had a short break. I entered the bathrooms just after William, and noticed only one toilet cubicle was in use. From the ensuing sounds, I deduced William was making himself comfortable, and this was corroborated shortly after by a text suggesting we go ahead and he would catch up – it didn’t sound like he was in a rush!  He appeared just as we were setting off, and casually  announced that he was now 2kg lighter.

Our first planned stop was at Mona Vale surf life saving club, about 15km in. When we arrived, we were a bit surprised to see an extensive construction site in place of the café and toilets that had been there only a few weeks before.  With that option out the window, we continued on to Warriewood and had a relaxing break in the sun at the life saving club there. Everyone seemed to be in good spirits, and shortly after we continued on our extended trek along the coastline of Sydney’s Northern Beaches.

We swiftly made our way through Narrabeen, and then the main road running alongside Collaroy beach. Here we had a short break and, in the process, lost Yee Harn. It turned out he hadn’t realised we’d stopped and had gone on ahead.

Setting off for Dee Why, we kept an eye out for Yee Harn in case we caught up to him. The plan here was to take off our shoes and walk through the canal connecting the lake to the sea. However, as luck would have it, the waves had washed up a heap of sand, forming a bridge of sorts, for us to cross.

As it seemed we had already saved some time, and seeing what looked like a sign indicating a trail on the other side of the sand dune, I thought it would be a good idea to divert from the planned route and take the track behind the lake. Incidentally, Jess had told me about it last time we’d walked by and assured me it was well laid out and easy to follow.

It wasn’t long after starting out on what ending up being a rather treacherous route, that we found Yee Harn standing there scratching his head.  He informed us he had already got lost – not a great start! “Hmmm, well”, I thought, “surely it can’t be that hard to follow”.  And so we set off keeping our attention firmly focused on what looked like it could be the track.

As we got deeper into this maze of bush it turned out there was no clear track to be seen anywhere. And some of the group, who were off the pace, ended up following us inside and calling out when they couldn’t find the way. Myself, Justin and Bob concluded there wasn’t much point trying to forge on, and so bush bashed our way to the beach.

10 minutes after arriving at the Dee Why shops, Elizabeth called to ask for directions and someone enquired whether they should turn left, lol. Clearly they didn’t turn up to the last “Navigation for Dummies” course!  After cursing me for an extended period, it seemed they found their way onto the actual track and eventually arrived in Dee Why.

After a decent break there, I observed we were rather behind schedule and so decided to pick up the pace so we could get to Manly at a decent time for lunch. Elizabeth was next to need to need a toilet break, and I was informed it was rather urgent and might take some time. But, as per the description in the event, there was to be no waiting for stragglers (or excessive toilet users), so I advised her she should meet us in Manly and on we went.

We set a good pace to Manly and got there by 2pm. I had already identified what appeared to be a good burger place, and we weren’t disappointed. Just as our burgers arrived Elizabeth turned up at the restaurant. William had already gone to stock up on his supplies at the supermarket, and I was next to leave, advising everyone that we were leaving from Manly wharf at 2.35pm.

I was surprised when Elizabeth turned up at 2.37pm, having made better time than I expected. Apparently she had woofed down her burger and was now all ready to go… or so we thought. About 10 minutes in it seemed she desperately needed to go to the toilet again, asking if we could wait. I’m sure my expression displayed a hint of sympathy, but as is typical for me on the ‘very long hikes’, I was more concerned with keeping to time than accommodating the nuances of people’s digestive issues. We did end up waiting again, near a second lot of toilets, only for Elizabeth to arrive and head straight towards those ones as well.

Luckily there were no more toilets for the next few km’s and so we set off at a good pace to make up some ground. Having finished the trail section of the Manly to Spit walk, we arrived at Clontarf Park where we enjoyed a bit of a break. Taz, who hadn’t been able to do much training for the event due to engaging in Ramadan, was looking a bit worse for wear. His ankle was sore and it didn’t look like he had much left in him. We waited about 15 minutes for the stragglers to catch up again, and as soon as they were in sight I jumped up and off we went again.

At Spit Bridge, around the 50km mark, we said goodbye to Yee Harn, Justin and Taz, and the five of us remaining continued on with our epic journey to The Rocks. The time went quite quickly as we made our way along the paths through Mosman, enjoying seeing how the other half live in their multi-million dollar mansions.  It wasn’t long before we got to Balmoral where some of us got some food from the Greek Cafe and Fish and Chip shop.  Next stop was Chowder Bay.

William and I had eaten dinner separately and anticipated an issue with the navigation.  We expected that the stairs connecting Balmoral with the hills overlooking Chowder Bay would likely be closed, but as luck would have it, the parks person had decided to take the evening off and the high gates covered in barbed wire were wide open…. hooray!

By this time it was very dark and so head torches were out. I noticed at this point a discernible slowing in the pace, including my own, as we started to reach the high 50’s. I’m also not sure exactly when William’s walking style had changed, but now I observed he was walking as if he had been riding on horseback non-stop for a few days. When I enquired about this new walking style he told me that, upon making a second visit to the bathroom, things had not gone quite so ‘smoothly’, for want of a better word! Fortunately our penultimate stop was to be at my apartment in about 5km’s time and with the promise of a tub of vaseline and wet wipes on the horizon, his spirits picked up.

Walking along the coastline around Taronga Zoo, there were a few party cruise-boats kicking off. I could tell William wasn’t himself when he began cursing them, and invoking some kind of divine power to sink their boats and put a swift end to their fun. By this time, with his legs so far apart and walking on the sides of his feet, it looked like he could do with a walking stick to help maintain his balance.

We were all feeling it as we got to my apartment, not least Elizabeth who collapsed in a heap and informed us she would require an extended visit to the toilet and a hot cup of tea before she could continue. But this time I realised there was no point trying to stick to the schedule (we were way behind anyway), and it was going to be more prudent to give people the chill time they needed before pressing on.

Eventually, with Elizabeth and William sorted, and with all of us having consumed some drinks and a few packets of sour frogs, we set off to make our way to the final destination. Along the way we enjoyed spectacular views of the harbour bridge which was all lit up. I commented that it looked like rainbow colours, but didn’t realise there was any significance to it. As it turned out it was actually ‘pride week’, and although none of us were aware, we all enjoyed the spectacular display.

We were all tired by the time we reached the harbour bridge, but it was also quite exhilarating, and with only about 2km to go, it was encouraging to know we were nearing the finish line.

We got some good photos near the southern end of the bridge, and there was a general feeling of relief as we climbed down the stairs towards The Rocks. But there were no drinks to celebrate for any of us. It was 10.30pm by this point (we had been waking for 15 1/2 hours) and we had the fundraising BBQ walk the next morning, so everyone was keen to get home.

What an accomplishment, to have walked 70km in a day. Of course there are many more big challenges on the horizon, not least the 100km for Oxfam in September, but this was definitely a memorable (and enjoyable) milestone!

Hi everyone! I'm William Chow, 27 year old hiker from Sydney, Australia. One of my many passion is hiking, trail running, camping, star gazing and exploring the outdoors so thanks for stopping by. Since I go hiking/bushwalking almost every weekend (and multi day hikes now and then when time allows), I decided to dedicate a site (seperate from my personal blogging site) to share my adventures on every walk I do, and I hope you feel my passion in my blog enough to do some walks yourself!

Think outside. No box required.