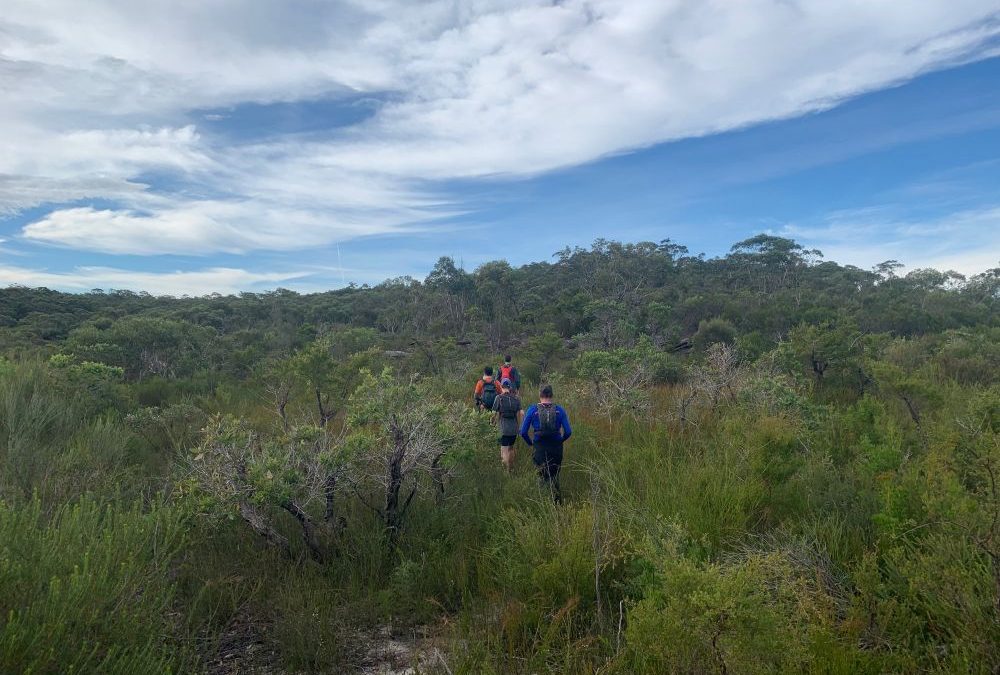 This blog is written by Rob Johnston.

Difficulty: 6/10 -> Taking distance/elevation/terrain into account. This one was mainly distance.

Interested in doing this? Here’s the alltrails recording Rob recorded:

It was a beautiful, sunny day as we set off on our hike and, after walking through the streets of Woy Woy for a while, we reached a massive hill. Next thing we knew Joachim (14 y/o French kid) was running  up it, with William trailing behind.

We waited at the top for Justin to catch up. He looked like he had seen better days when he arrived, but was keen to persevere. We then headed into the bush and did a bit of rock scrambling, at which point Justin decided to call it a day, so we parted ways and continued on.
Being an exploratory walk it took a bit of navigation, and Joachim led the way using his trusty Garmin watch. We climbed down a steep hill and after walking through some rain forest, came out to a few kms of fire trail.
After walking for about 45 mins, we were trying to find a turn-off before back-tracking for a while, when next thing we knew Nina started shrieking hysterically and dancing around on the spot. Looking down at her legs we saw they were swarming with bull ants. “How do I get them off?” she exclaimed! After helping her remove her shoes and socks we could see it was going to take a while to de-ant herself, so we agreed to finish the final 1km section and pick her up on the way back.
Up until that point the walk had been fairly diverse, with some scrambling, bush amidst rocky surfaces, rain forest, bushy paths and fire trail. Now we made our way, across fire trail and roads, to head to Pearl Beach for lunch.
It wasn’t long before Nina was enquiring how long until the lunch stop (apparently her blisters were flaring up again). Having needed to make some changes to the map I mistakenly advised it was only 2 1/2km to go, when it was actually 6 1/2km. As the distance dragged on I could started to hear an irate voice behind me, steadily increasing in volume, and realised this miscalculation had not been well received.
Our next challenge was encountered when trying to make our way from the fire trail to the street and turned out someone had built their house over what used to be the track (how inconsiderate!). After realising there was no other way, we made our way past a barking dog on one side and let ourself through the side gate of this person’s property.
Rob was next to get a bit snappy, possibly getting a bit h-angry, and I think everyone was ready for a lunch break by then. As it turned out, Rob hadn’t planned the route to the cafe  carefully enough and there was some deliberation because it was going to be another 4km (explain that one…oops!). However as luck would have it, a cafe had opened across the road from where these discussions were taking place just that day, and everyone was grateful to be able to get a cold drink and a burger.
In the meantime Ethan had gone AWOL, and had apparently caught a ride to the cafe we were meant to go to… or at least that was what he told William, but it didn’t quite work out. An hour later Ethan turned up at the cafe, hobbling along and looking a bit worse for wear.  By this stage Nina was trying to rally some energy to continue, but as luck would have it (I think she was ready to call it a day by this stage) her bladder started leaking (the plastic thing, not the organ) and so she bailed too.
The rest of us continued on, covering some of the same ground as earlier in the day, and were rewarded with spectacular views of the harbour and tree range once we got to the top of the mountain. We were only nudging the 30km mark by this point, however William apparently had an important engagement, so he left us and we continued on the path.
After walking another 10km we did some calculations and realised we could catch the last train (and not have to catch the rail replacement bus) if we could set an average pace of 6km p/h. Everyone agreed to give it a go (except Kenny), and so with his objections being ignored he decided to fall in with everyone else as we started jogging along the highway, with Joachim leading the charge.
It was soon getting dark, so we donned our head torches and continued on in the bush, with Joachim checking his Garmin and giving us regular updates on the pace we needed to maintain to be able to catch the train.
Walking briskly down the final track of the mountain, the lights of the town were below us, and we made our way down as quickly as we could so that our efforts to catch the train weren’t wasted.
The Garmin didn’t turn out to be 100% reliable, or maybe it was partly human error, so as we were nearly at the train station we found ourself trapped within the high fenced off perimeter of a school (which we had decided to try and find a way through, rather than turning around and back-tracking). Although encircled by this 6 foot high fence stretching along as far as we could see, we weren’t deterred, and managed to scale it and race over the road, just in time to catch the train.
Everyone was hot and sweaty by then, but pleased to have made the train. Another successful (and eventful) day out in the wilderness.

Check out the Relive video here:

Hi everyone! I'm William Chow, 27 year old hiker from Sydney, Australia. One of my many passion is hiking, trail running, camping, star gazing and exploring the outdoors so thanks for stopping by. Since I go hiking/bushwalking almost every weekend (and multi day hikes now and then when time allows), I decided to dedicate a site (seperate from my personal blogging site) to share my adventures on every walk I do, and I hope you feel my passion in my blog enough to do some walks yourself!

Think outside. No box required.